VM World 2018 Session on Automating NSX and CNA with Concourse

Video walks through the nsx-t-gen pipeline and a real time install of NSX-T, all achieved within 20 minutes of the presentation.

Posted by Sabha Parameswaran at 6:28 PM No comments:

I had been working and supporting a set of tools aimed at easing and automating install and use of VMware's NSX-T SDN product with Pivotal's PAS (Pivotal Application Service) and PKS (Pivotal Container Service - k8s offering) product versions on vSphere platforms. I wanted to share the evolution of these tools and how they work together.

nsx-t-gen is a toolkit that helps automate the install of VMware NSX-T SDN product on vSphere platform. It uses Concourse pipelines to make a set of tasks easy and automated while keeping the various pieces together towards the objective of fully automation of NSX-T.

The various components used in this toolkit are:


The end result is a fully installed NSX-T Mgmt plane running on a managed cluster (with edges) while using single or multiple compute clusters as transport nodes. Various Cloud native product offerings (like PAS or PKS or others) can be installed and managed on top of this NSX-T managed network infrastructure.

The current version of NSX-T supported against vSphere are (each version is in its own branch):


All of these pipelines use similar set of pipeline parameters and tasks while abstracting the version dependencies from the end user to provide the same zero-touch install experience. 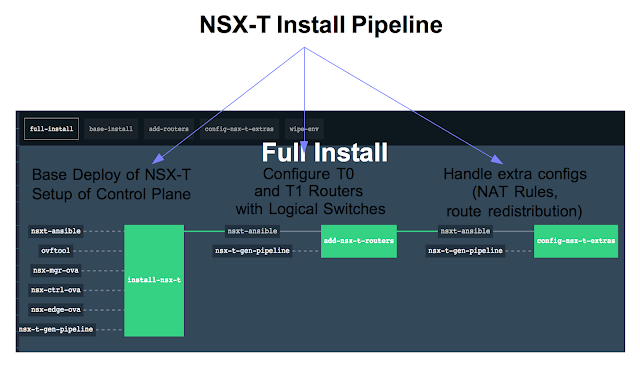 The nsx-t-ci-pipelines is aimed at install of Pivotal Products with NSX-T integration with fully automation including and not limited to:

One of the challenges most customers or field people face relates to installing these products in completely offline or isolated environments (no online access to any external resource).

The Concourse pipelines implicitly assume an online, interconnected setup to pull down various resources, github repos and docker images that are internally used as part of a task definition. This makes the whole isolated, offline working model break it.

I helped build a model of a pipeline that was aimed at truly offline pipeline execution to install NSX-T and PKS (Pivotal Container Service) in such limited restricted environments. The outcome was canned-pks. 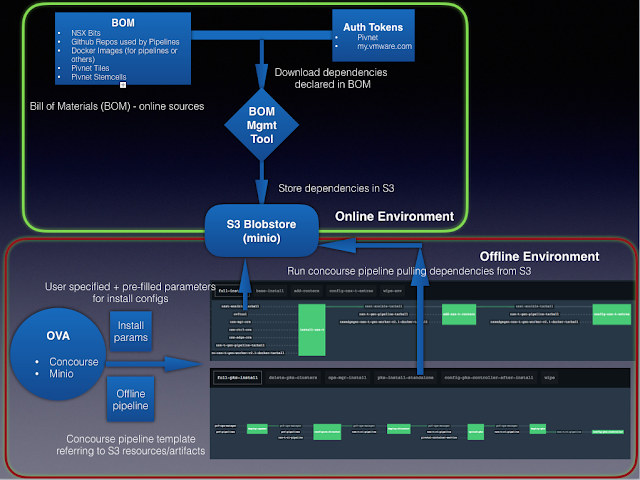 There are two portions to using the canned-pks toolkit:
The complete steps are detailed in the canned-pks repo. It supports an opinionated install view of NSX-T (single compute cluster vs arbitrary # of compute clusters supported in base nsx-t-gen pipeline and certain precooked configs) to achieve a fast, simple and easy install of NSX-T with PKS in offline environments.

Also, I am happy to announce that the nsx-t-gen pipeline codebase has now been adopted by VMware and would be maintained going forward in form of their nsx-t-datacenter-ci-pipelines repo.

All of these tools should help users get an more easier and faster ramp up experience with NSX-T and PAS/PKS product stack.

Just a note of caution: All of the above tools are not officially supported but free to use at user's own discretion and risk.

Posted by Sabha Parameswaran at 3:12 PM No comments:


With Oracle announcing end of free support for past versions of Java, more users are expected to use OpenJDK and I believe its very useful for ThreadLogic to support OpenJDK thread dumps.

For people new to ThreadLogic, they can check the older posts on the need for such a tool and its usage in analyzing thread dumps.


Feedback welcome on the tool.
Posted by Sabha Parameswaran at 2:13 PM No comments: